The task list represents all the tasks the user has been assigned to, tasks that are in progress (draft) and completed tasks.

Tasks are segregated by user and by role. 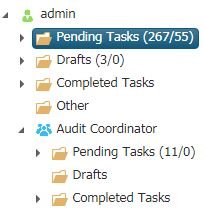