The Shingo Model – Measuring What Matters in Operational Excellence 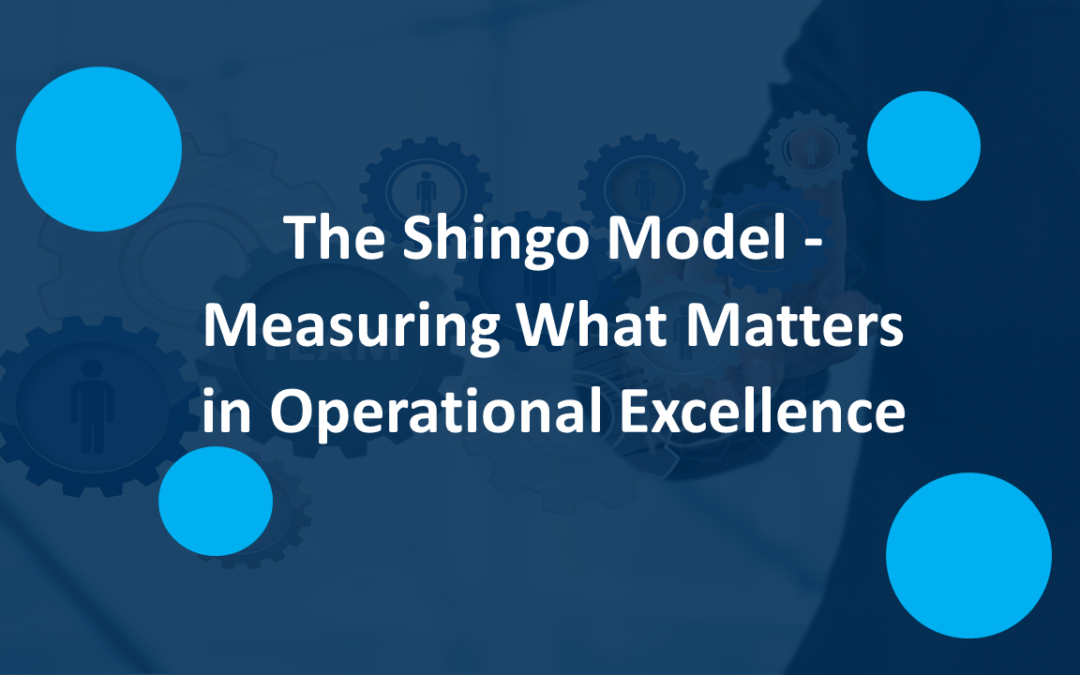 Measuring What Matters in Operational Excellence

Born in Saga City, Japan, Shigeo Shingo would grow up to become an industrial engineer and receive an honorary Doctorate of Management in recognition of his expertise in manufacturing practices (as well as the driving force behind the Toyota Production Systems). His work involved defining quality at the source, the value flow through customers, methodology of working with zero inventories and notably his work with SMED (single minute exchange of dies) for rapidly setting machines.

Dr. Shingo was later honored in 1988 with an annual prize in his name (The Shingo Prize for Excellence in Manufacturing). The Shingo Prize is awarded each year to companies worldwide that achieve “world-class operational excellence status.” This prize is unofficially referred to as the “Nobel Prize for Manufacturing” having achieved premier status over the years.

What The Shingo Model is and is not

There are ten guiding principles to the Shingo Model governing the creation of operational excellence while organizing them into four dimensions. The model also includes what is referred to as the transformation process (known as, the diamond). The critical relationship between systems, principles, results and tools is represented in this diamond. 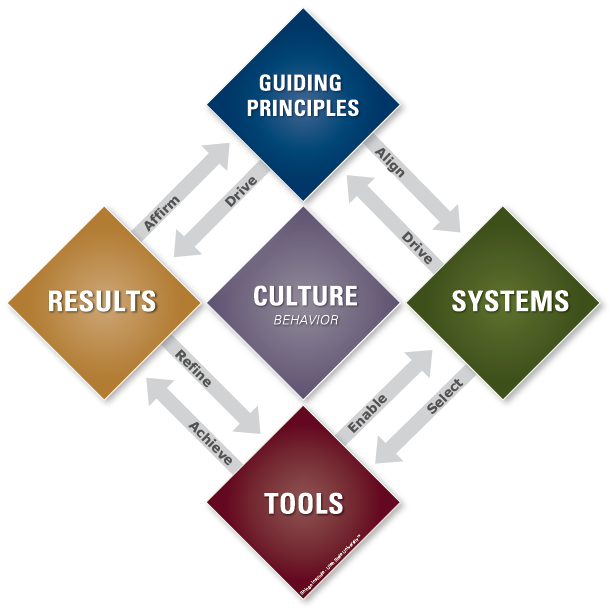 The Shingo Model is not an additional program or an alternative initiative that organizations introduce with other programs. Rather, it focuses on the Shingo Guiding Principles and the importance of them as they relate to tools, results, systems and culture. The Shingo model gives an organization structure in-which they can anchor initiatives and close the gaps toward operational excellence.

A LOOK AT THE FOUR DEMENSIONS OF THE DIAMOND

UNDERSTANDING THE NEED FOR THE SHINGO MODEL

It does not matter whether the objectives of an organization is altruistic or financial in nature, in all facets of the organization, the focus by executives is on results. Systems are designed for this specific purpose and tools are then created to support these systems. When a particular tool or system does not achieve the target results, executives will begin the process of changing or modifying the current systems used in hopes of reaching the target set forth.

While on the surface this methodology looks simple enough, it is missing recognition of a critical component. Systems and tools cannot operate a business alone. They need people to do it properly. Each person in an organization behaves in a way consistent with their individual sets of values and beliefs. It is the aggregate of all these behaviors that will ultimately define the organization’s culture; and culture is what will greatly influence any organization’s results.

THE THREE INSIGHTS OF ORGANIZATIONAL EXCELLENCE

If we look at organizations that are created by accident or without strong attention to culture most times will have long-standing negative effects. Cultures built around promoting those who seek to gain power, might have individuals who keep knowledge to themselves in an effort to maintain decision making authority as trusting others is not possible their minds. This will make the organization react to issues much slower than normal, in addition to the fact that the decisions made would not be in the best interest of the organization as the decision-maker may not be the best person to make the decision. Taking this one step further, one can see how organizations whose behaviors foster fear or blaming, survival mode, backstabbing or general malaise can contribute to negative cultures endemic to the organization.

On the other hand, if we look at organizations practicing operational excellence, we see companies built around trust, humility, respect, innovation empowerment and collaboration. The question now becomes what exactly is at the root of these high-functioning organizations? How do their results differ from lesser, weaker cultures? How do they manage the culture rather than the culture managing the organization? The Shingo Model addresses this in three distinctive insights that unfold into the guiding principles:

The way people behave in an organization will ultimately determine the organizations results.

Ideal results will only come about by leaders creating a culture where ideal behavior is the expectation and practiced by each team member.

In short, behaviors are influenced greatly by beliefs. What needs focus regarding this is recognizing the effect that systems have on behavior.

If we look at systems overall, we see that they are designed to create a specific business result without any regard for the behavior that the system drives.

This leaves managers working hard to realign management, improvements, and work systems in order to achieve the ideal business results.

The foundational rules that govern all consequences are known as principles.

The better one understands the ideal behavior, the better they will be at understanding how to design systems to meet ideal results.

If an organization truly wishes to remain successful in the long-term, they will need to be relentless in their quest to continually improve in order to make things better. Any failure to provide continuous improvement will invariably result in the decline of the organization. Excellence must always remain a unanimous focus point for each team member. It is important for all team members to be aware that even though perfection may not actually be attained, it is within the pursuit of excellence to perfection that brings out the absolute best in all humans. 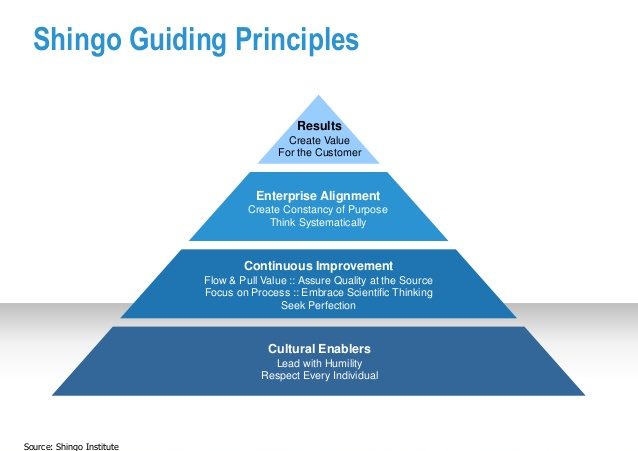 One common trait among leading practitioners of enterprise excellence is a sense of humility. Humility is an enabling principle that precedes learning and improvement. A leader’s willingness to seek input, listen carefully and continuously learn creates an environment where associates feel respected and energized and give freely of their creative abilities. Improvement is only possible when people are willing to acknowledge their vulnerability and abandon bias and prejudice in their pursuit of a better way.

Examples of Ideal Behavior
– There is consistent, predictable leadership engagement where the work happens.
– Employees can report issues with confidence in a positive response.

Respect must become something that is deeply felt for and by every person in an organization. Respect for every individual naturally includes respect for customers, suppliers, the community and society in general. Individuals are energized when this type of respect is demonstrated. Most associates will say that to be respected is the most important thing they want from their employment. When people feel respected, they give far more than their hands—they give their minds and hearts as well.

To better understand the principle of respect for every individual simply ask the question “why?” The answer is because we are all human beings with worth and potential. Because this is true, every individual deserves my respect.

Examples of Ideal Behaviors
– Create a development plan for employees including appropriate goals.
– Involve employees in improving the work done in their areas.
– Continually provide coaching for problem solving.

Knowledge sharing across others experiencing similar issues, problems and solutions

All outcomes are the consequence of a process. It is nearly impossible for even good people to consistently produce ideal results with a poor process both inside and outside the organization. There is natural tendency to blame the people involved when something goes wrong or is less than ideal, when in reality the vast majority of the time the issue is rooted in an imperfect process, not the people.

Examples of Ideal Behaviors
– When an error occurs, focus on improving the process that created the error.
– Ensure that all parts, materials, information and resources are correct and meet specifications before using them in a process.

Process is at the heart of EPC – transparency, localization variance management, visualization, focus on continuous improvement of the process and not on blaming individuals.

Innovation and improvement are the consequence of repeated cycles of experimentation, direct observation and learning. A relentless and systematic exploration of new ideas, including failures, enables us to constantly refine our understanding of reality.

Value for customers is maximized when it is created in response to real demand and a continuous and uninterrupted flow. Although one-piece flow is the ideal, often demand is distorted between and within organizations. Waste is anything that disrupts the continuous flow of value.

Examples of Ideal Behavior
– Avoid creating or having more product or services than are necessary to serve customer demand.
– Ensure the resources that are needed are available when required.

6. Assure Quality at the Source

Perfect quality can only be achieved when every element of work is done right the first time. If an error should occur, it must be detected and corrected at the point and time of its creation.

Perfection is an aspiration not likely to be achieved but the pursuit of which creates a mindset and culture of continuous improvement. The realization of what is possible is only limited by the paradigms through which we see and understand the world.

Program based, not project based:  Rolled out to every employee in the company to become part of the company culture

An unwavering clarity of why the organization exists, where it is going, and how it will get there enables people to align their actions, as well as to innovate, adapt and take risks with greater confidence.

Examples of Ideal Behaviors
– Clearly communicate the direction and purpose of the organization to all.
– Set goals that are connected to the organization’s overall goals.

Clearly Defined Objectives with sub-objectives that support the individual goal & performance indicators that quantify and monitor the performance of that objective.

Documentation and communication of all company high level policies & values

Through understanding the relationships and interconnectedness within a system we are able to make better decisions and improvements.

Open ability to raise issues, challenges, barriers, exceptions, etc. on preventing the organizations ability to attain a specific target and raise recommended changes and improvements that support that objective.

Breakdown objectives and performance indicators down to the employee level so they understand how their objectives align with the company’s objectives.

10. Create Value for the Customer

Ultimately, value must be defined through the lens of what a customer wants and is willing to pay for. Organizations that fail to deliver both effectively and efficiently on this most fundamental outcome cannot be sustained over the long-term. 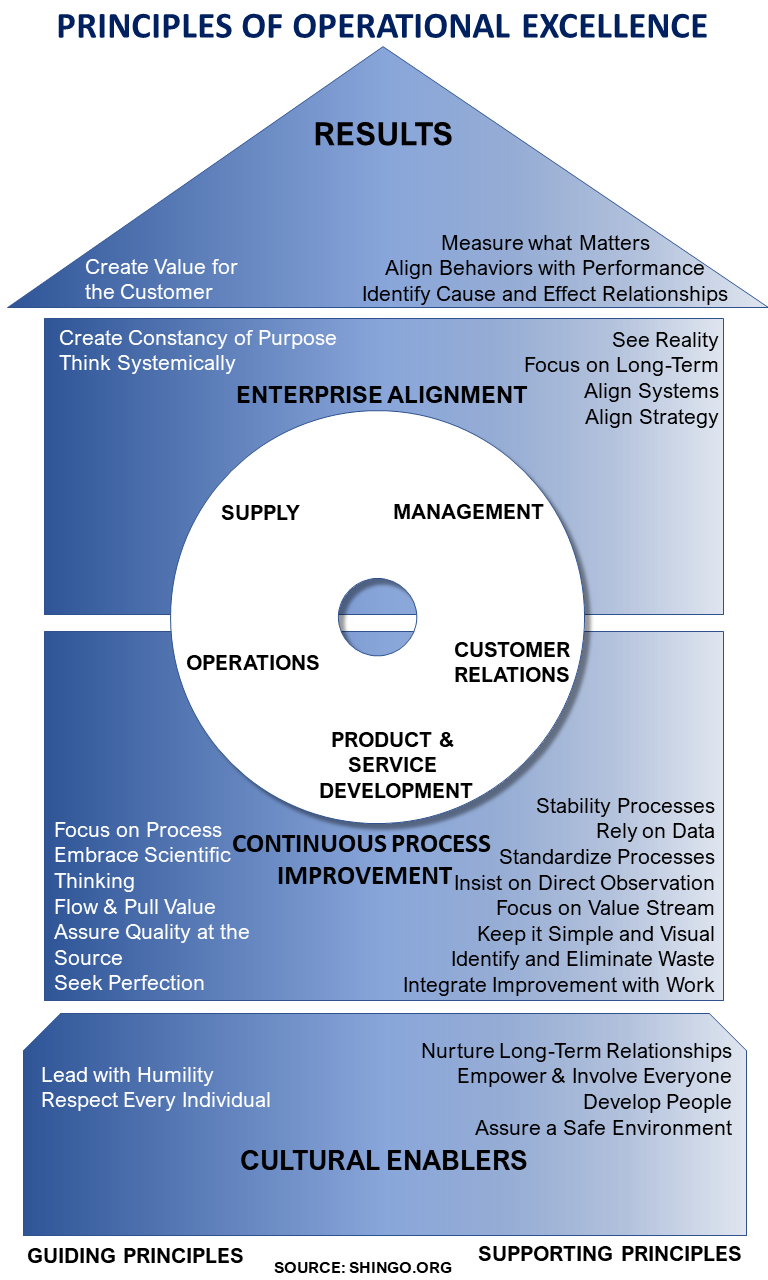 Interfacing Consultants have extensive experience with The Shingo Model and in guiding organizations on how to implement this model. They are also experienced in identifying and defining the scope of key implementation milestones, as well as gathering and documenting the business requirements and selection criteria needed to ensure the execution and continuous improvement cycles remains a success.

Trial our Enterprise Process Center Suite (EPC) to see how the alignment of EPC to The Shingo Model would support success in your organization!